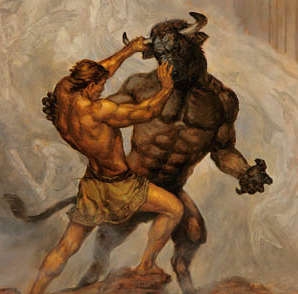 Once, there was a young boy named Theseus. Nobody knew who his father was, for both King Aegeus of Athens and Poseidon had been fond of his mother Aethra.

Once, there was a young boy named Theseus. Nobody knew who his father was, for both King Aegeus of Athens and Poseidon had been fond of his mother Aethra. Right before Theseus was born,Aegeus said to Aethra, "If we shall have a son, then when he becomes of age, tell him to lift this rock and take my sword and sandals." Aegeus then hid both his sword and his sandals under a large boulder and set sail for Athens.

This happened in a small town called Troezen, where Theseus grew into a strong, young man. When Aethra thought it was time, she took Theseus to the large boulder and told him to lift it. Theseuswrapped his mighty arms around the boulder and lifted it with no difficulty at all. Then, he threw the boulder into a nearby forest. Aethra then told him to take the sword and sandals and go to Athens.

Aethra and her father begged Theseus to go to Athens by sea, for horrible robbers and bandits inhabited the road, but Theseus was bold and went overland. After a few miles, he met a large man with a shiny club. "I am Periphetes, the cudgel man, and I'm going to bash your head with this club," he said. "That's a mighty fine club you have there," replied Theseus.

Periphetes handed the club to Theseus. Theseus hit Periphetes on the side of the head with it. "Not bad," thought Theseus, "not bad at all. I think I'll keep this."

Theseus continued on his journey. Not much further, he saw a giant man with a battle axe, standing on the side of the road. "I am Sciron and these are my cliffs. To pass you must wash my feet as a toll!" the man said. "What would happen if I didn't?" replied Theseus. "I will chop off your head with this axe, and don't think that puny little twig you're carrying will save you, you're absolutely...WRONG!!!!" Sciron yelled. So, Theseus sat down and started to wash Sciron's feet. Theseus looked over the side of the cliff, and saw a monstrous turtle at the bottom. That's when her realised that Sciron was the infamous giant that threw people off the cliff for his man-eating turtle. When he took a grasp of Sciron's foot,Theseus jerked aside and hurled Sciron off the cliff.

Theseus walked further ahead when he saw a man that looked remarkably like Sciron. The man said, "Could you do me a favor young man? Hold this pine tree down for me." The man's name was Sinis, the pine-bender. Sinis bent a pine tree down and waited for Theseus to hold the tree down with him. Then, Sinis let go, expecting Theseus to be catapulted in the air; however, Theseus held it down. Sinis stooped down to get a better look at the tree, thinking that it had been broken, when Theseus let go of the tree, hitting Sinis in the chin and knocking him unconscious.Theseus then tied Sinis' legs to one bent pine tree, his arms to another. Then, Theseus let go, the trees ripping Sinis in half; vultures screamed with delight.

Theseus went on his way again. After a few miles, it got dark. Theseus saw a large house up ahead of him. He decided to ask the owner for a bed for the night, so he walked up to the door and knocked. A man came to the door and said, "Welcome young man. Come in, you look tired. My name is Procrustes. I have a magic bed for you to stay the night on. It is exactly six feet long, but can fit anyone, be they short or tall." Theseushad been warned about a man named Procrustes. His so called "magic" bed did fit anyone, but in an unpleasant way. If a person was too short, Procrustes would chain their arms and legs and stretch them. If they were too tall, he would chop off their legs until they were just right. Procrustes led Theseus into the room where the bed was. Theseus pushed Procrustes onto the bed and chopped off his legs; and just so Procrustes wouldn't feel any pain, he sliced his head off too.

The next morning Theseus reached Athens. It was the largest city he had ever seen. He went to the palace where Aegeus lived. Aegeus had married Medea, who (being a sorceress) had him under her power. With her powers, Medea recognized Theseus and knew that he would try to get rid of her. So she told Aegeus that Theseus had come to kill him and that she would give Theseus poisoned wine. Aegeus, unaware thatTheseus was his son, agreed. He invited Theseus to a banquet; however, when Theseus was just about to drink his wine, Aegeus recognized the sword and threw the wine cup to the floor. Theseus and Aegeus were filled with happiness. Medea left in a chariot drawn by dragons.

Theseus and Aegeus were happy for a long time, but when the time of the spring equinox came, all Athenians were in desperation, as a ship with black sail approached Athens. Theseus begged his father to tell him why the Athenians were sad, but Aegeus said nothing. Theseus went down to the harbor and asked the captain of the black-sailed ship what was happening. The captain told him about how Androgeus, the eldest son of King Minos of Crete, had accidentally been killed in Athens. Minos was very angry. He attacked Athens and demanded that the Athenians pay a yearly tribute of seven young man and seven young women to be fed to the Minotaur. The Minotaur was a monster, half man and half bull, residing in the Labyrinth, a large maze under King Minos' palace. Theseus went back to Aegeus and said, "I will go to Crete as one of the victims and I will slay the Minotaur!" "No, my son," said Aegeus, "you mustn't go. You are my only son. The only heir to the throne." "I must go, father. I must prove that I am a hero." said Theseus. In the end, Aegeuslet Theseus go, but made him promise that if he returned back to Athens alive, he should change the black sails to white ones. So, Theseusvolunteered to go as one of the fourteen tributes.

When Theseus and his companions landed at Crete, Minos was there to welcome them. He asked each of them who they were. When he askedTheseus, he said, "I am Theseus, prince of Athens, son of Poseidon!" "If you were the prince of Athens," Minos said, "wouldn't old Aegeus be your father? To prove you are the son of Poseidon, fetch my ring," he said, throwing it into the sea. Praying to Poseidon, Theseus dived into the water. He saw the nymph Thetis, who gave him the ring and an old crown. Theseus went back to shore holding the ring and the crown; Minos laughed.

That night Theseus was visited by Minos' daughter Ariadne. She said to him, "Theseus, I want to help you kill the Minotaur, but promise me to take me with you to Athens afterwards, and make me your queen." Theseus agreed and Ariadne gave Theseus a ball of silk thread, telling him to tie it to the entrance of the Labyrinth, unrolling it as he moved through the tunnels. The string would lead him back to the entrance.

The following day, Theseus and his companions were forced into the Labyrinth. Theseus tied the string onto a rock and told everyone to follow him. He led them towards the center of the Labyrinth where the Minotaur was. When they got there, they saw the beast sleeping. Theseusjumped on it and ripped off one of its horns. Theseus started poking with the horn at the Minotaur, who was furious. Then, Theseus ran to a safe distance and threw the horn like a javelin. The horn ripped into the monsters neck and was stuck there. The Minotaur, enraged, charged atTheseus, but fell dead before reaching him. Everyone cheered and Theseus became a hero! They followed the thread back to the entrance of the Labyrinth.

Theseus, Ariadne, and the rest of the tributes boarded the black-sailed ship and set sail for Athens. One night, the god Dionysus came to Theseusand said, "You mustn't marry Princess Ariadne, for I have chosen her as my own bride. Leave her on the island of Naxos." Theseus did as the god told him, but he was so sad that he forgot to change the sails. As the ship approached Athens, Aegeus sat on a cliff watching and waiting forTheseus to come; when he saw the black sails, he jumped into the sea. As a result, that fatal stretch of water was named after him and became the Aegean.