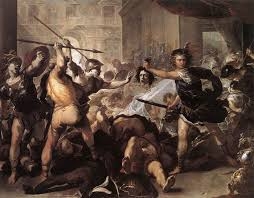 Perseus' life was a very interesting one, full of adventures. He was the son of the god Zeus and Danae. His reputation and character quickly turned him into a local hero of Argos (a place in Peloponese, Greece). Arcisius, Perseus' grandfather, had asked an oracle if he would ever have any kids; the answer he got was shocking and led him t

Perseus' life was a very interesting one, full of adventures. He was the son of the god Zeus and Danae. His reputation and character quickly turned him into a local hero of Argos (a place in Peloponese, Greece). Arcisius, Perseus' grandfather, had asked an oracle if he would ever have any kids; the answer he got was shocking and led him to live in a life of paranoia. He was told that his daughter would have a son that would eventually kill him. Arcisius, driven by the force of fear, had his daughter Danae jailed in an underground cave with brass walls. Nevertheless, the mighty Zeus, who had an eye for beauty and a way with women few dared to compete, had already spotted the beautiful maiden. He transformed into a shower of golden rain and entered the cave where Danae was held. Through their union, Danae gave birth to a baby boy, that she managed to keep secret for some time.

It wasn't long, though, that her angry father found out about the baby. He refused to believe that Zeus had anything to do with it, so he condemned Danae's nurse to death, as he believed that she orchestrated this affair. He thought about killing his grandson himself, but his guilt would not let him. Desperately seeking a solution that would pose no danger to his life, he made up his mind. He had a wooden ark built for his daughter and his grandson, and he immediately ordered the two of them to be placed in it and to be set adrift at sea.

Days and nights passed, Danae and her baby barely alive. Eventually, the wooden ark washed up on the island of Seriphos. There, a fisherman named Dictes, who was the brother of Polydectes, the ruler of the island, found it. He kindly took in young Perseus and his mother and shared his home with them. During this time, Perseus grew into a strong and brave man blessed with many talents, undoubtedly the result of a god'sgrace. However, Polydectes fell in love with Danae, and Perseus, wanting to protect her, kept his mother under guard at all times. So, Polydectesdevised a plan; he invited some friends for dinner, and asked them what gift they would bring him if he was ever to ask for one. Perseusanswered that if it was necessary, he would bring the head of Medusa, the Gorgon, to him; Medusa was a fearsome monster, who turned to stone anyone who would be unlucky to stare her in the eyes. The King agreed and asked Perseus to bring him the head of the Medusa, otherwise, he would take his mother by force.

Perseus set forth on his adventure to get Medusa's head. The Gods, of course, who loved to intervene in the affairs of mortals, would not leavePerseus helpless. Both Athena and Hermes set out to help Perseus with this challenge. With his intelligence and wit, Perseus managed to trick the nymphs. They gave him winged sandals, so he could fly above the ground; a bag, so he could carry the head of the Medusa; and the helmet of Hades, which would make him invisible. Using the winged sandals, Perseus flew above Medusa, looking only at her reflection using the shiny shield that Athena had given him. Invisible thanks to Hades' helmet, Perseus cut Medusa's head off, placed it in the bag and set for home.

On his way home, he met Andromeda whom he rescued from a sea monster. They quickly fell in love and decided to get married. However,Andromeda's uncle, who wanted her for himself, disagreed and plotted to murder Perseus. Having Medusa's head gave Perseus a great advantage. He took out the head and as soon as Andromeda's uncle look at it, he turned into stone. When Perseus arrived home, he did the same with Polydectes, who was harassing Perseus' mother.

What happened to Arcisius, Perseus' grandfather, though? Upon hearing of Perseus' achievements, he fled far away, but that wasn't enough to escape his fate. Much, he attended at a games ceremony in the city of Larissa, which was arranged by King Tentamides.

Perseus participated in the event; when it was his turn to throw the discus, it slipped from his hand and hit his grandfather on the head, killing him. When Perseus found out he had killed his grandfather, he was deeply saddened and he buried him with honour.