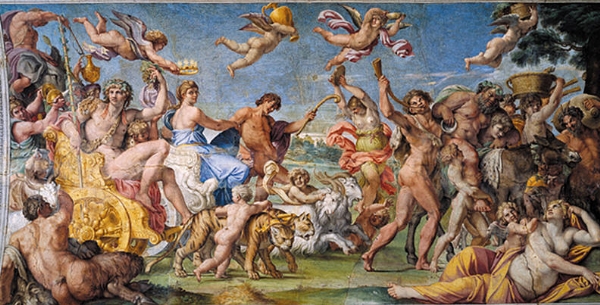 On his way back to his homeplace, Thebes, however, he was spotted by pirates, to whom he appeared as a rich young man; he might even be the son of a king, and certainly looked like his family would pay a substantial amount for his safe return. Happy at their good luck, the pirates seized him and brought him aboard their ship. They then attempted to tie him to the mast, but the ropes simply would not hold. Whenever the rope touched his body, it just fell apart.Dionysus watched calmly, smiling. After many unsuccessful attempts, the helmsman realised that only a god would be responsible for this.

He called out that the crew should free Dionysus and beg his forgiveness, but the captain mocked the helmsman as a fool and called for the crew to set sail. The crew raised the sail and caught the wind, but the ship did not move. Looking around, they saw the ship quickly becoming overgrown with vines that held it in place. Dionysus then changed himself into a lion and began to chase the crewmen. To escape, they leaped overboard, but as they did, they were changed to dolphins. Only the helmsman was spared of Dionysus' wrath.

On his passage through Thrace, he was insulted by King Lycurgus, who bitterly opposed his new religion. Initially, Dionysus retreated into the sea, but he returned, overpowered Lycurgus and imprisoned him in a rocky cave. Dionysus planned to let him reflect and learn from his mistakes. However, Zeus was enraged that a mortal man had insulted a god, so he blinded and then killed Lycurgus.

Dionysus eventually reached Thebes, which was ruled by his cousin Pentheus. However, Pentheus did not know of Dionysus. Dionysus was with a group of his followers, who were naturally singing and dancing loudly, flushed with wine. Pentheus disliked the loud strangers, and ordered his guards to imprison them all. He referred to their leader as a cheating sorcerer from Lydia. When he said this, the blind old prophet Teiresias, who was already dressed as one of Dionysus's followers, gave Pentheus a warning: "The man you reject is a new god. He is Semele's child, whom Zeusrescued. He, along with Demeter, are the greatest upon earth for men." Pentheus, seeing the strange garb Teiresias had on, laughed at him and ordered his guards to continue. The guards soon found out that the ropes fell apart, the latches did not hold, and that there was no way they could imprison Dionysus' followers; so, they brought Dionysus to Pentheus. Dionysus tried to explain at length his worship, but Pentheuslistened only to his own anger and insulted Dionysus.

Finally, Dionysus gave up and left Pentheus to his doom. Pentheus pursued Dionysus' followers up to the hills where they had fled after escaping from prison. Many of the local women including Pentheus' mother and sister had joined them there. Then, Dionysus appeared to his followers in his most terrible form and drove them mad. To them, Pentheus appeared to be a mountain lion. In a berserk rage they attacked him and Pentheus realised he had insulted a god and would die for it. His mother was the first to reach him, and ripped his head off, while the others tore off his limbs.

Recommends for The Wanderings of Dionysus