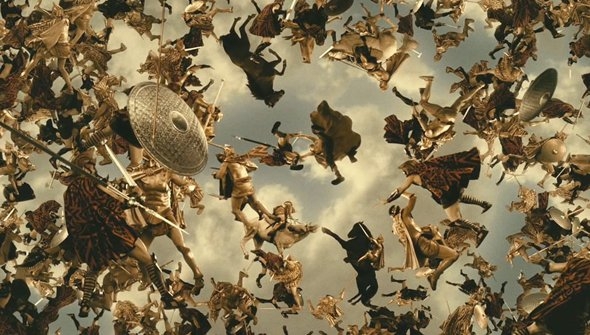 The Titanomachy, in Greek mythology, was the great war that occurred between the Titans, the old generation of Greek gods, and the Olympian gods, led by Zeus.

The Titanomachy, in Greek mythology, was the great war that occurred between the Titans, the old generation of Greek gods, and the Olympian gods, led by Zeus. The war lasted for a total of ten years, ending in the defeat of the old pantheon, which was based on Mount Othrys, and the establishment of the new one, based onMount Olympus.

When the Titans were in power, Uranus was the ruler of the universe. However, he caused the wrath of his wife, Gaea, after incarcerating some of her children, the Cyclopes and the Hecatonchires, in the depths of the earth, Tartarus. Gaea decided to take revenge, and created a giant sickle; she then told her children to castrate their father in order to overthrow him. Only Cronus agreed, and after he formed a plot with his mother, he managed to overpower his father and castrate him. FromUranus' blood that fell on the earth, three sets of children were born; the Gigantes, theErinyes, and the Meliae; while from the blood that fell into the sea, the goddess Aphroditewas born.

Cronus took the throne from his father, but not before Uranus made a prophecy that his son would also be overthrown by his own sons. Afraid that he would lose the reign, Cronus turned into the same tyrant god that his father was; he put his brothers back into Tartarus, and also ate his own children, in an effort to prevent the prophecy from becoming true. However, his wife Rhea tricked him and saved her youngest child, Zeus, from his father's paranoia. She hid Zeus in a cave in Crete, where he was raised by a goat, Amalthea.

When Zeus grew up, he became his father's cupbearer, without revealing his true identity. Helped by Metis, the Titan goddess who later becameZeus' first wife, he gave Cronus a mixture of wine and mustard, causing him to vomit one by one the children he had swallowed. When all of his brothers and sisters were freed, Zeus gathered them and convinced them to start a rebellion against their father.

When the War ended with the Olympians on the winning side, all Titans except Themis and Prometheus were jailed in Tartarus, and were guarded by the Hecatonchires. Zeus, along with his brothers Poseidon and Hades, divided the universe by drawing straws; Zeus won and became the king of the sky, as well as the ruler of mortals and gods; Poseidon became the ruler of the seas; while Hades, who drew the shortest straw, became the ruler of the Underworld. This was the dawn of a new era in Greek mythology.