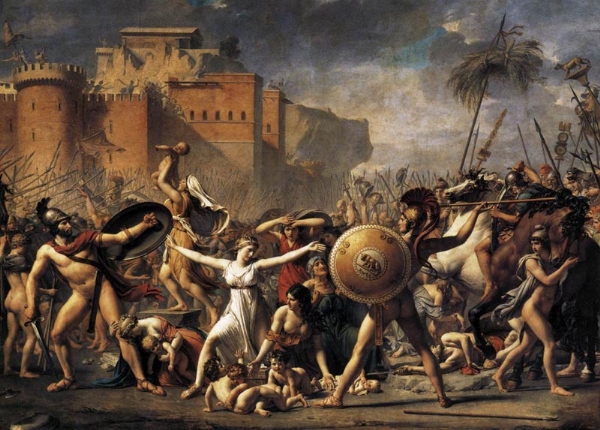 The Romans, as they grew and conquered other lands, adopted those things from other cultures that they liked. They even adopted other peoples' gods. When the Romans met the Greeks and heard all the stories about the Greek gods, they adopted all the Greek gods. They changed the names of the gods to make them Roman and changed some of the stories to make the gods act more like Romans. Soon they even were able to act like these had been Roman gods all along 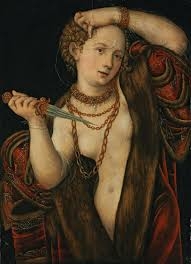 Lucretia was a matron in Roman history and mythology, who had an important role in the shaping of the Roman Kingdom into the Roman Republic. Although contemporary sources to certify Lucretia as

Lucretia was a matron in Roman history and mythology, who had an important role in the shaping of the Roman Kingdom into the Roman Republic. Although contemporary sources to certify Lucretia as a historical person do not exist, later historians agreed that in fact there was such a woman. The husband of Lucretia was Lucius Tarquinius Collatinus, one of the leaders of the revolution that erupted as a result of his wife's death.

Lucius Tarquinius Superbus, the last king of Rome, was involved in a war against Ardea, so he sent his son Sextus Tarquinius to Collatia on a military mission. There, he was warmly welcomed by the governor, Lucius Tarquinius Collatinus and Lucretia. During a feast, Lucius and Sextus started talking about the virtues of wives, and Lucius proposed that he checked on his wife. He went home and found Lucretia weaving with his maids, thus winning the debate. That night, Sextus sneaked into Lucretia's bedroom and woke her up. He told her she would have two choices; she could have sex with him and become his wife or he would kill her along with her slave and then say he caught them in bed together.
The following day, Lucretia went to her father's house, who was the chief magistrate of Rome, and took the supplicant's position. She then asked to summon witnesses, and proceeded to describe in tears how she was raped by Sextus. She eventually asked for vengeance; while the people were discussing on how to deal with this matter, Lucretia took out a dagger and stabbed herself in the heart, dying in her father's arms. The death of Lucretia caused an outrage among those who were present and all vowed they'd rather die than give up their liberties to the king and his son. According to a different version, Lucretia did not go to her father's house, but instead asked that her father and her husband should visit her and bring one friend each.
The two people who joined were Publius Valerius Publicola and Lucius Junius Brutus. When they all went to Lucretia's room, she explained to them what had happened; she then made them swear an oath of vengeance. In the end, while they were talking about the incident, Lucretia drew the dagger and killed herself. The death of Lucretia spurred a revolution in the Roman Kingdom that eventually overthrew the king and his son and resulted in the institution of the Roman Republic. Lucretia Is also called Lucrece.