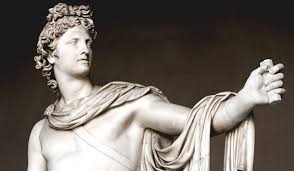 Apollo was the son of Zeus and Leto, twin brother of Artemis. He was the god of music, and he is often depicted playing a golden lyre.

Apollo was the son of Zeus and Leto, twin brother of Artemis. He was the god of music, and he is often depicted playing a golden lyre. He was also known as the Archer, far shooting with a silver bow; the god of healing, giving the science of medicine to man; the god of light; and the god of truth. One of Apollo's most important daily tasks was to harness his four-horse chariot, in order to move the Sun across the sky.

Apollo was an oracular god, as he was the prophetic deity in the Oracle in Delphi. People from all over the known world travelled there to learn what the future held for them, through his priestess Pythia. The god was also worshipped in the island of Delos, which was initially dedicated to his twin sister Artemis. In relation to the rituals and practices that took place in Delos andDelphi, it could be said that there were two completely distinct cults in honour of Apollo.

As already mentioned, Apollo was also considered as the god of healing and medicine, either through himself or through his son Asclepius. At the same time, he could also bring forth disease and plague with his arrows; it was considered that a god that can cause disease is also able to prevent it.

He was born on Delos, where his mother Leto seeked refuge; Hera, having realised that Leto was impregnated by her husband Zeus, bannedLeto from giving birth on land. So, Leto managed to go to Delos, which had recently been formed, and therefore, was not considered a real island yet. The inhabitants of the island, along with Artemis who had been born a day earlier, helped Leto give birth to Apollo. Leto then promised the Delians that Apollo would always favour them for having helped her.

His holy tree was the laurel, and his holy animal was the dolphin.