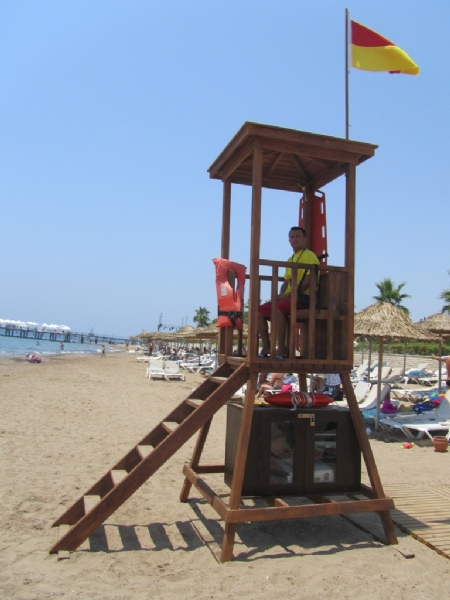 Before hitting the waves, there are a few things to keep in mind. Even if you're heading to the pool or lake instead of the ocean, listen up — many of the tips below apply to hanging out near any body of water. No matter where you’re headed, we've rounded up 13 tips to help you keep safe at the shore.

Watch for warning flags (and know what they mean).

Different beaches (and states) have different coloured flags and assigned meanings, so be sure to ask the lifeguard if you’re not sure what the flags signify.

Generally, red flags indicate strong surf and currents (i.e., “Be Careful!”). At some beaches, red means “beach closed” — so be sure to check before entering the water. Yellow flags indicate moderate surf and currents — the water is likely to be rough but not exceedingly dangerous. Exercise caution and stay near the lifeguards. Green flags indicate the ocean is calm or clear (though it's always smart to remain alert). Blue or purple flags often indicate that potentially dangerous marine life (think sharks or jellyfish) are in the area or have been spotted nearby. Use caution. And remember: Not all beaches are suitable for swimming, so know the rules before you set foot on the sand.

Remember how electric devices and the bathtub don’t mix? Neither do lightning and large bodies of water. Check the weather report before heading to the beach. Avoid the beach if there’s lightning in the forecast and wait at least 30 minutes after the last thunder boom before heading back out to the sand. The beach will always be there tomorrow!

Know how to swim Ocean Swimming

Swimming skills make a big difference: Giving children aged one to four formal swimming lessons can reduce the risk of drowning by as much as 88 percent. If you can’t do the doggie paddle (at the very least), don’t go near the water. Ocean swimming is different from swimming in a calm pool or lake — be prepared to deal with strong surf before running in. If you’re at the beach with a child or adult who can’t swim, make sure everyone has a well-fitting lifejacket handy. If you’re going boating, every passenger should wear a properly-sized lifejacket at all times.

Also keep in mind that the ocean floor is not flat and beaches can change drastically from year to year. When heading into the water, be aware that the ocean floor can drop off unexpectedly, so don’t move out quickly without being prepared to swim in water over your head.

Last, but certainly not least, obey the buddy system while swimming. Keep a friend nearby in case either of you ends up needing help (see section on "rip currents" below).

Pick a swimming spot close to a lifeguard.

Lifeguards are there for a reason — they know and can see things about the beach that most beachgoers don’t. Take note of where they’re stationed on the beach and stay near them when swimming — most drownings occur at unguarded sites. Also be aware that currents will naturally push you down the shore, so make note of where you started (say, by remembering a stable landmark like the lifeguard’s flag or your brightly-coloured umbrella on shore) and which way the current is moving. Return to that spot in the water regularly so you’re never far from a lifeguard.

Rip Tide, Waves don’t always break evenly along the shore. And when they don’t — i.e., when they break more strongly in some areas than others — it can cause a circulation in the water that produces a rip current (basically a strong channel of water extending from the shore out into the water). Rip currents also tend to form near a shallow point in the water, such as a sandbar, or close to jetties and piers and can happen at any beach with breaking waves (including the Great Lakes!). They’re the number one hazard for beachgoers and can pull even the strongest swimmers out to sea. If you see a current of choppy, off-coloured water extending from the shore, steer clear. If you do get pulled out, stay calm, save your energy (let the current carry you for a while), and keep breathing. Don’t try to swim against the current! Gain your composure and start swimming horizontal to the shore until you’re out of the current. Then turn and swim diagonally towards the shore. If you can’t make it to the shore, wave your arms and make noise so someone can see or hear you and get help.

Be aware of the waves.

They’re much more powerful than you think. A recent study out of Delaware found that injuries resulting from strong waves can range from simple sprains, broken collarbones, and dislocated shoulders to more serious injuries including blunt organ trauma and spinal injuries (which can lead to paralysis). Shore breaks — or waves that break directly on shore (rather than breaking a few yards out and rolling in more slowly) — in particular have the potential to cause serious neck and spinal injuries. When in the water or near the water line (where the water hits the shore), never put your back to the waves. Also be sure to check in with the lifeguard before hitting the surf to ask about the wave conditions at your beach.

Alcohol doesn’t only affect judgment; it can also dehydrate you, increasing the likelihood of heat-related sicknesses. Among drowning-related injures of people aged 15 years or older, almost 22 percent were alcohol-related. We know it’s tempting to enjoy a few Pina Coladas while baking on the beach, but if you’re going to imbibe steer clear of the surf and hydrate properly.

Attractions, shopping, outdoor activities - everything you want to do and see in Didim is easily accessible - within walking distance, a short drive Didim is known for being a very walkable city with a compact downtown core, so you’ll likely find man...