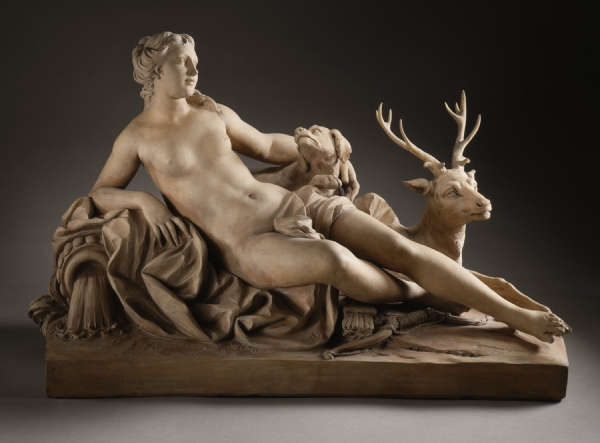 Artemis was the goddess of chastity, virginity, the hunt, the moon, and the natural environment. She was the daughter of Zeus and Leto

Artemis was the goddess of chastity, virginity, the hunt, the moon, and the natural environment.

She was the daughter of Zeus and Leto, twin sister of Apollo. She was born on the island of Ortygia (Delos), where Leto had found shelter after being hunted by the lawful wife of Zeus, Hera. As soon as Artemis was born, she helped her mother give birth to her twin brother, thereby becoming the protector of childbirth and labour. She asked her father to grant her eternal chastity and virginity, and never gave in to any potential lovers; devoted to hunting and nature, she rejected marriage and love.

She was the protector of nature and the hunt; both wild and tame animals were under her protection. She also protected the agriculture and animal herding.

Artemis appeared in a number of myths. In the myth of Actaeon, he was a hunting companion of Artemis; at some point, he saw the goddess naked bathing in a spring and tried to rape her. As a punishment, Artemis transformed him into a stag and his hounds killed him. In the myth of Orion which has various versions, Orion was also a hunting companion of Artemis and the only person to have won her heart. However, he was accidentally killed either by the goddess or by a scorpion which was sent by Gaea. In another myth, Callisto was one of the followers of Artemis and thus she had remained a virgin. Zeus, however, changing his form to resemble Artemis, managed to seduce and rape her, impregnating her. Callisto gave birth to Arcas, but later, she was transformed into a bear either by Hera or Artemis. Arcas almost killed his mother, but Zeus stopped him and placedCallisto in the heavens as a constellation. According to other sources, both Callisto and Arcas were turned into the Ursa Minor and the Ursa Major constellations.