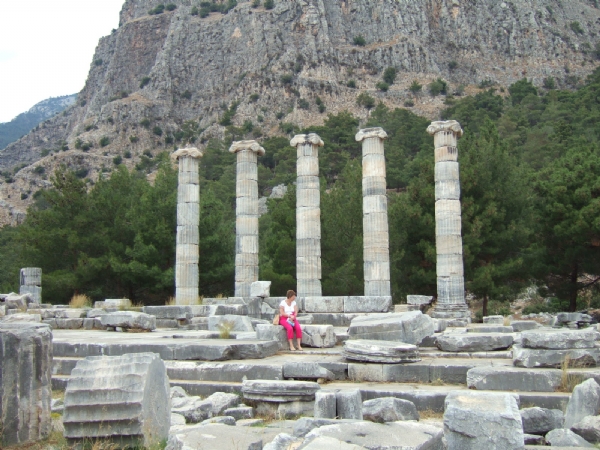 Priene, in Asia Minor Ionia, the most extensively excavated Hellenistic city in Asia Minor and an excellent example of Hellenistic architecture, comes to life in FHW’s production "A Walk Through Ancient Priene". With the creation of a structured environment, clear and balanced, the city expressed the mature philosophical and political thinking of the Classical Period. Public buildings, private residencies and temples constitute the sights of this tour of this city of Asia Minor.

Historical information The city that is being presented was built in 370 BC. However, the references in the sources until 330 BC are very few, while it is almost impossible to give a trustworthy account of the history of the old city. We know that it belonged to the Ionian League and participated in the Ionian Revolt, while one of the Seven Wise Men of ancient Greece, Bias of Priene, was born there. In the Late Byzantine Period the city declined and became uninhabited, but without ever being completely destroyed or being wholly rebuilt. Therefore, Priene is an unusual complete historical snapshot, since the basic city planning, the public buildings and the walls of the city belong in a single stage of development, in the 2nd century BC. The city planning was carried out according to the Hippodamian system, which Aristotle believed to be the most suitable to the ideal city. In the Roman Period, the city was under Rome's sphere of influence and from 129 BC it was incorporated into the newly founded Roman province of Asia. In the following centuries we note a shrinking of the city. The temple of Athena and the gymnasia were abandoned. Their building materials were used for the construction of a basilica, which was built in the centre of the city, as well as for residencies on the site of the old Gymnasium. In the middle of the 10th century Priene flourished again. Between the 11th and the 13th century the city became known as "Sampson" and it was the centre of important imperial episkepsis (a fiscal unit) in the Maeander Valley, while in the second part of the 13th century it became part of the Turkish state. In 1673 English tradesmen from Smyrna discovered Priene and a century later archaeological excavations began.