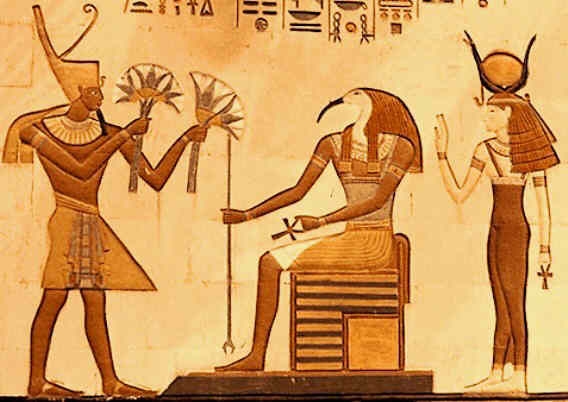 This is a list of Egyptian gods and goddesses from Egyptian mythology. The ancient Egyptians worshipped many gods at different times and in different places. 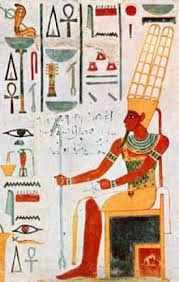 Amon (Amen, Amun, Ammon, Amoun) Symbols: ram, goose, bull Cult Center: Thebes, Hermopolis The god of Thebes, he was shown as human. He was viewed (along with his consort Amaunet)

Amon (Amen, Amun, Ammon, Amoun) Symbols: ram, goose, bull Cult Center: Thebes, Hermopolis The god of Thebes, he was shown as human. He was viewed (along with his consort Amaunet) in Hermopolis as a primordial creation-deity. Up to the time of the XIIth Dynasty Amon was a Theban god of no more than local importance, but as soon as the princes of Thebes had conquered their rival claimants to the rule of Egypt, and had succeeded in making their city a new capital of the country, their god Amon became a prominent god in Upper Egypt. It was probably under that dynasty that the attempt was made to assign to him the proud position which was afterwards claimed for him of "king of the gods". In spite of Amon's political ascension, he also enjoyed popularity among the common people of Egypt.

He was called the vizier of the poor. It was said that he protected the weak from the strong and was an upholder of justice. Those who requested favors from Amon were required to demonstrate their worthiness or to confess their sins first. Typically, the strength of a god would add luster to the position of the pharaoh. However, as Amon grew in popularity, his priests grew increasingly powerful in influence and wealth. As such, they often attempted to assert themselves in the political arena. When the queen Hatshepsut found supporters among the priests of Amon, she honored their god by claiming that he was her father and she built her temple in Deir el-Bahri in his honor. Ironically, such political maneuvering helped to destroy Amon's popularity. Starting in the reign to Thutmosis IV, a movement began in the royal house to pay homage to a purer form of the sun
. The sun-disc Aten slowly became the god of the pharaohs. The situation came to a head during the reign of Akhenaten. During his reign as pharaoh, he moved the capital of Egypt away from Thebes to Akhetaten where he and his followers could worship Aten exclusively. The pharaoh also began a campaign of erasing the name of Amon from the public works of Egypt. Following the death of Akhenaten, his successor Tutankhamon moved the capital back to Thebes and restored the old gods. However, Amon never regained his former following and the pharaohs and the country focused their religious devotion to the gods of the Osirian family. The word or root amen means "what is hidden", "what is not seen", "what cannot be seen" and the like. This fact is proved by many examples which may be collected from all periods.
Now, not only is the god himself said to be "hidden", but his name is also "hidden,"and his form is said to be "unknown." In the times approaching the Ptolemaic period, the name Amon appears to have been connected with the root men, "to abide, to be permanent;" and one of the attributes which were applied to him was that of eternal. Amon was self-created according to later traditions. His wife was the mother-goddess Mut and his son was the moon, Khonsu. According to the older Hermopolitan customs though, Amon was made by Thoth as one of the eight primordial gods of creation (Amen, Amaunet, Heh, Heqet, Nun, Naunet, Kau, Kauket).