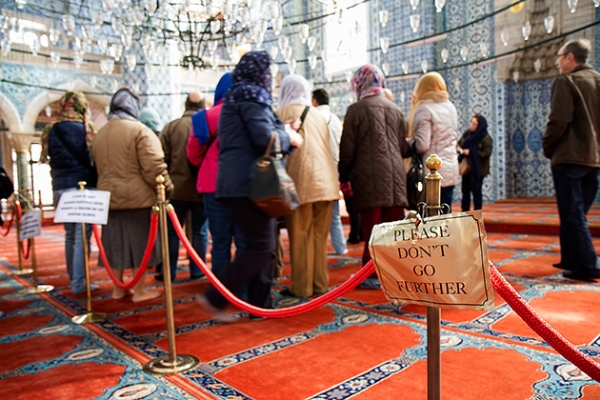 Traditions and culture remain priorities in Turkey and should be greatly respected by those who travel to this country.

Public drunkenness (especially the loud and obnoxious variety) is definitely not appreciated and is frowned upon, especially in more conservative areas of the country. Drunken tourists may also attract the attention of pickpockets. However what is absolutely not tolerated with drunkenness especially by the police, if it is accompanied with physical aggressiveness towards other people, this may result with a fine and if this is repeated a heavier fine and/or a visit to the police station may result (if you are tourist, deportation from the country can result).
Certain gestures, common in the western world, are considered rude expressions in this culture. People tend to be tolerant if they can see you are a foreigner. They know you are probably doing it subconsciously, but if you take the time to keep these in mind, you won’t have any misunderstandings. Making an ‘O’ with your thumb and forefinger (as if to say “OK!”) is rude because you are making the gesture for a hole - which has connotations referring to homosexuality in the Turkish psyche.
Avoid clicking your tongue. Some people do this subconsciously at the beginning of a sentence. It is a gesture of dismissal.
Also the "got your nose" gesture which is made by making a fist and putting your thumb between your forefinger and the middle finger is considered the equivalent of the middle finger in Turkey.

Do learn gestures of the head for “yes” and “no”, which can be very confusing. “Yes” is a downward nod of the head and "no" is an upward nod of the head while raising eyebrows and clicking the tongue. Shaking your head might not be understood as “no”. Try to learn the Turkish words evet (yes) and hayir (no).

Do take off your shoes before entering a home. Do bring a modest gift. Keep in mind that many Muslims adhere to an abstinent lifestyle – a bottle of alcohol is thus not an ideal gift. Giving money is considered rude.

Do bargain. It’s regarded as a polite gesture and a form of dialogue to negotiate the price before buying.

Attractions, shopping, outdoor activities - everything you want to do and see in Didim is easily accessible - within walking distance, a short drive Didim is known for being a very walkable city with a compact downtown core, so you’ll likely find...